Why Everyone Hates Jazz…

How to learn ‘Groove’

The Art of Conversation

How to Get Results

The Value of Restriction (part 2)

The Value of Restriction (part 1)

Support me on Ko-Fi

"Al is without doubt one the most creative musicians I've had the pleasure to work with. He's gently honest in the studio, a truly instinctive improvisor, wonderful composer and selfless accompanist."

“A MUSIC fan has finally admitted that jazz is bad.“

On the face of it it’s pretty funny. It demonstrates just enough knowledge of a perceived listener stereotype and name drops a couple of albums to seem well-informed. I definitely chuckled on my first read. The reality is that without a little discussion I think it just helps everyone dig a little further into their trenches though. 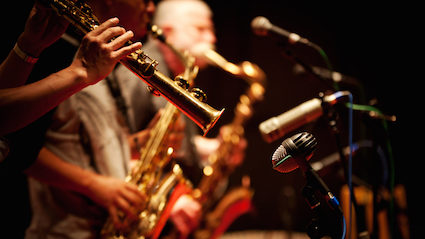 Jane Thompson said that despite owning over 3,000 albums spanning genres from ‘electro-bongo’ to ‘Peruvian be-bop’, she has struggled to find a single recording of jazz that did not make her angry.

Thompson said: “I worried that I was musically thick and that’s why I didn’t get the apparently-random squeaks and farts.”

If you’ve ever been on holiday to a country where you don’t speak the language it’s a similar feeling. You know the words must make sense but it just seems random and you end up feeling stupid for not understanding. You’d need to make a conscious choice to learn that particular language and accept that it’s going to take a long time before you are fluent. If you grew up in a bilingual household you’re going to have a major advantage if the right languages come up.

I was lucky to grow up in a house where they ‘spoke’ a liberal mix of pop, prog-rock, jazz-fusion, trad-jazz, classical etc so it was much easier to get along with those things as I grew up. I went to school with people who spoke fluent Heavy Metal so picked that up too. I’ve learnt a few words of reggae and country as I’ve got older but I’m far from fluent…

From the other side though. If dealing with someone that doesn’t speak your language it isn’t enough to just raise your voice, speak slower and point a lot before losing your temper if you aren’t understood. If you really want to communicate then it’s important to consider common ground to build towards something more complicated.

Even when we’re starting off speaking the same language there can be difficulties. I remember one of my A-level English teachers being really put out that I wasn’t already familiar with Shakespeake, Jane Austin & Chaucer – they just hadn’t come up during my GCSE and not things that I had had any interest in approaching independently. I didn’t easily relate to the language, stories or attitudes of the characters. His irritation seemed quite unreasonable to my 16yr old self and made a real obstacle to my engagement with those things.

“I tried smoking weed but that just made the jazz physically painful.”

This reminds me of that horrible office poster ‘You don’t have to be mad to work here, but it helps’… You don’t have to be stoned to enjoy Reggae, but it helps… You don’t have to be on Ecstasy to enjoy a rave, but it helps… If you want to smoke weed to listen to jazz then the 60’s era that it’s most associated with would be the best place to start. I’m not advocating drug use but it’s useful to understand that part of their attraction is their mood inducing properties. People make music in line with their moods. If they are on drugs when they make it the music will match the drug – and yes, alcohol counts. It’s quite possible to enjoy the music without taking the same drug (or any at all) but can be very difficult if you are on a different drug…

“After a fourth attempt to get all the way through ‘Bitches Brew’ I had an epiphany that I didn’t need this in my life. I’m finally at peace with the fact that it’s rancid.”

To bring back the language analogy. “Studies in China have shown that functional literacy in written Chinese requires a knowledge of between three and four thousand characters.” (Wikipedia) If I’d had four attempts at learning Chinese and wasn’t able to make sense of the language my conclusion would not be that the language was at fault. Neither would it be to beat myself up for not understanding it quickly.

There’s no way around it ‘Bitches Brew’ is hardcore. It’s difficult, experimental, in the moment stuff that requires a very particular mindset to get something out of. That doesn’t mean it’s rubbish, or that you are stupid, just that you didn’t get it. It’s cool to say ‘not for me’ and move on. Try it again in 20 years and give ‘Kind of Blue’, ‘Songs for Swinging Lovers’, ‘Heavy Weather’ or ‘GroundUp’ a go in the meantime. Better yet find a jazz fan who knows what your taste in music is to recommend things that have elements in common.

“I celebrated by putting on a few Beatles albums, with tunes and songs under three minutes and no-one doing solos just because they can. It was all brilliant, apart from the White Album.”

I celebrated my dislike of oranges by eating apples…

This is not an insignificant sentence. Our media definitely shapes the way we listen to music. There is a general underlying message that vocal music is good, instrumental is bad. Short is good, long is bad (regardless of content). Most jazz is instrumental, often longer than the officially sanctioned five minute mark, and therefore bad by association. Short, simple, easy to learn vocal phrases that feel familiar and can be repeated quickly offer a form of mental prozac. For people with stressful lives or just generally a minimum amount of time to spend in abstract thought this is bound to be appealing. By today’s production and song writing standards the later Beatles albums are absurdly complicated and challenging even within their very short individual song spans. There is an enormous range of different musics being created constantly but only a tiny fraction of appropriately processed and advertiser approved ‘product’ is ever publicly on display. Without more widespread and regular exposure those things can never become more than niche. Our media is driven by the need for advertising revenue to survive, that incentive is naturally at odds with experimentation and therefore mainstream public acceptance.

“Thompson now runs a course for people coming to terms with jazz deafness, which attempts to shift the blame from the listener to the performer.

I think this already happened and possibly has always been the case. Simplicity is generally upheld as good – Punk, Reggae, Pop, Dance etc. Complexity is seen as bad or elitist : Classical music, Prog Rock, Jazz. There’s something pompous, elitist, weird, wrong with you if you like those things.

Maybe you don’t care, you don’t have time for this, I understand. If you want to be a slightly more enlightened person then go hang out with someone who likes music totally different to your own taste. Get them to play you their favourite albums for a whole evening and tell you why they love them. Don’t say anything negative about their choices, join in with their enthusiasm and decide in advance that you are going to enjoy it. If you can genuinely do that, without secretly getting caught up in how much you already know that you won’t like it, then I’ll be surprised if you don’t end up a little bit happier and a little bit more understanding.

​Al has performed, recorded and taught all over the country and internationally for more than 25 years. Highlights include sessions, tours and workshops with : Peter King, Grice, Paul Jones, P.P. Arnold, Scott Hamilton, Siobhan McCrudden, Gary Bamford, Gilad Atzmon, Mike Outram, Alan Barnes, Ant Law and many more as well as h​is own projects : Pointless Beauty, Biophosmos, Snow Giants and Mahatmosphere. As an educator he has taught for schools, colleges and privately for more than 25 years and has a BA (Hons) / PGCE in Music.

​Advice on practice and performance ​for all situations

Please log in again. The login page will open in a new tab. After logging in you can close it and return to this page.